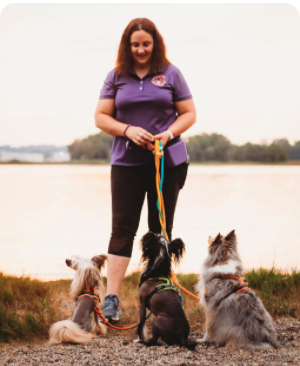 Five years ago, Jo Ferraris had a stressful career as a Pharmacy Technician and 2 young twins. She had set aside her childhood dream of becoming a vet after college, and satisfied her love of animals by taking her pet dogs to agility and scent detection classes.  When Jo sought out a trainer for her younger dog’s reactivity, a surprise offer led to her quit the pharmacy world and open her own dog training business.  Jo’s dog training facility, Mischief Managed Mayhem to Manners, in Exeter, Rhode Island currently hosts group classes, day training, and private lessons 6 days a week, and employs 5 trainers, grossing over six figures a year.

Her biggest piece of advice:

Don’t be afraid to ask questions.

A lifelong interest turns into a full time career:

As a child, Jo always wanted to be a veterinarian.  She went to college with the intent to continue on to veterinary school, but in her 4th year, decided she didn’t want to be a vet after all. She changed course and worked for almost 10 years as a pharmacy technician.  It paid the bills, but she did not find it fulfilling.

After she got her first performance dog, MAS Windsor, she started agility as a hobby. Soon, he turned her onto scent detection – they were at agility class and saw a group doing it, and immediately began taking classes. Jo quickly worked her way up to being a CNWI.

It was when she got her second sport prospect, BC mix Banjo, that she began to work with a trainer for his reactivity.  Her interest in animals and training must have showed, because out of the blue that trainer offered her a job.  Even though she had twin babies, and she was not considering it up to then, Jo switched careers almost immediately.

In the beginning, Jo continued to work in the pharmacy industry part time.  She worked for the trainer who first offered her a job, and the school where she took agility also hired her.  She taught classes in a local pet store.  But it wasn’t long before she had left the pharmacy altogether. By the fall of 2018, she had formed an LLC and was working full time in her own business.

Since the beginning, Jo has done everything in the business herself, from website, to accounting, to teaching all the classes. She even found time to add another set of twins to her family, bringing the number of kids to 4.  She credits the Trainer’s Growth Group with helping her grow her business steadily, right from the beginning.  She joined when TGG was first formed, and values the ability to bounce ideas off of and ask questions of people in the industry, from website to marketing, to getting a building,

“Everything has changed over the past year,” says Jo.  While the pandemic interrupted her business briefly, since June of 2020 it has consistently grown.  After the shutdown, she never went back to holding classes in the pet store.  She hired her first assistant that June and another one in July, and they taught classes outside until the winter.  Over the winter, they taught classes with 2 students at a time in her basement, fitting 10-12 classes per week, plus weekends outside.  When one of her trainers lost her full time job, they added day training for puppies. It was so successful that they decided to move out of her basement and lease a facility.  Not one to wait around, Jo found a space in a strip mall next to a fear free groomer, and moved in on June 1, 2021.

Currently, Jo’s facility holds group classes 6 days a week, a puppy prep school and a day camp for adult dogs, along with private lessons.  This year, Jo has also hired an employee to do social media and an accountant.  She employs 5 trainers, 2 of whom are teaching nearly full time, and she has already expanding her space beyond the 2500 sq. ft the started with to add another 1300 sq. ft.  Remarkably, Jo was able to quit her job in pharmacy, and build a 6-figure business within 3 years, all while raising 4 kids with a husband who also works full time.