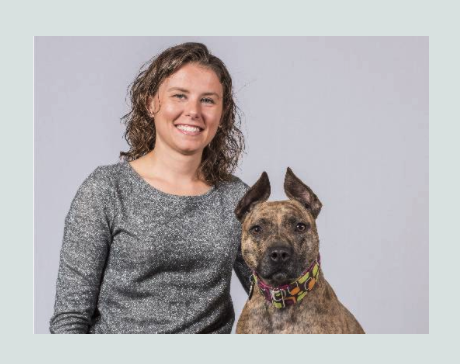 Crystal started working in a vet clinic, cleaning kennels, at 16 years old. She worked her way up, and by the time she went to college a few years later, she knew she wanted to go to vet school.  Then, 10 years ago, life pushed her into being a dog trainer. Now, despite the many doubters who said it couldn’t be done, she is earning a good living, has employees, and is planning to open a facility in early 2022.

Her biggest piece of advice:

Bring employees on sooner than you think.

Crystal went to college to be a veterinarian.  She had started working in a clinic when she was still in high school, and felt sure that’s what she wanted to do.  By the time she finished college, though, she realized that she was more interested in behavior than in medicine.  So, around 2011, she started doing training part time.  She got her CPDT certification in 2012, set up her LLC, and quickly moved to full time, just on referrals from the vet clinic where she had worked.

Not everyone was supportive of her decision.  She was told more than once that “you can’t make a living as a dog trainer.” She was worried they were right. But, she started taking clients, and grew fairly quickly.  She had experience with aggression, so was comfortable taking behavior cases.  For several years she did everything herself, including working up to 60 hours a week.

In the past few years, Crystal has taken her business to the next level. She was one of the first members of the Trainer’s Growth Group. She was searching for ways to make her business better, seeking out groups on Facebook with people who were running a successful business. “There’s no manual,” she says, so she followed people who were “one step away from where I am.” Before joining TGG, she made well under $50,000 a year. Since joining TGG, she has hired her 3 interns and an administrative assistant.  They currently do private 1:1 training, with some puppy training and basic manners, but still do mostly behavior cases.

Crystal uses “Profit First,” a system for financial tracking for your business introduced in a book by Michael Michalowicz, and has also made extensive use of automation and package pricing that are frequently discussed in TGG. Her business crossed the 6-figure mark in August 2021, and is on target to reach her goal of $150,000 for 2021.  An even bigger goal in Crystal’s mind is opening a brick and mortar facility. She expects to do that at the beginning of the year.